The Awakening: can shadow work liberate the world after the election?

We’ve felt it haven’t we? The shifts. The shadow. The discomfort. The awakening.

I haven’t known quite what to say yet regarding recent world events – the elections, Standing Rock, shootings, the division, and that’s just in the US. A few days after the election results came in, I was relieved to travel to Australia to speak at an event of over 150 SOULpreneurs.

My heart was able to heal a little so I could get grounded before I spoke out of pure fear, anger, or sadness. I was embraced by the most nurturing and kind people in Melbourne – thank you to Rachael Jayne Groover for the opportunity.

I wish I could say that I was surprised when the election results came in, but I wasn’t. Heartbroken at first? Yes. Surprised? Unfortunately, no.

What will we choose as a collective whole? As individuals?

What will create the change in the world that we all want to see, regardless of who you voted for or if you are in the US?

I believe it starts with shadow work and clearing work. For those of you who know Access Consciousness® work that I use, these tools are especially handy.

First, let’s look at shadow work, which is a concept developed by Carl Jung and I especially like Debbie Ford’s exploration of this work. The shadow forms a part of your unconscious mind and is built up of everything you feel ashamed of thinking and feeling.

When we first look at the shadow and see the gift in it, we can liberate it instead of being controlled by it.

Shadow work is the art of knowing that we are everything, including the aspects we despise and refuse. For those of you who believe in past lives, it’s also the concept that we have been everything at some point in another life.

In other words, we have been the murderer and the victim. We are the activist and the racist. Every single one of us.

In order for something to exist outside of us, it has to exist within us as a collective whole.

This is It’s extremely uncomfortable inner work and deeply liberating. It frees us from the self-imposed prisons of fear, hopelessness, and crippling separation from our true self and the connection we crave with others.

This works allows us to see that we are in fact NOT separate from each other, and we can see ourselves and each other with more compassion. Isn’t that what the world is hungry for?

It’s usually at this point where people reject Shadow Work. No one wants to accept the racist, sexist, or greedy political system within our own soul. On the flip side, it can be just as impossible for some to accept the champion, brilliant master or healer within considering that we live in a world where it’s better to be “humble” than own our greatness.

Enter spiritual override: we’ll just think positive, meditate a little more, and do our affirmations while burning a white candle and wearing our favorite crystals.

If this is starting to trigger you or offend you, then I invite you to stay with me because there is a nugget here for you that can be liberating.

Back to shadow work.

Shadow work is about accepting all parts of who we are. The person who gets jealous and sad. The one who is pathetic and the fraud. As well as the enlightened master and change-maker.

It’s about accepting all aspects of who we are.

The thing is, this work takes a lot of damn courage as well as the willingness to get so uncomfortable that we just sit with it before distracting ourselves from the discomfort.

The moment we are aware of it, change can happen. Avoidance and projection are not awareness, which is what most of the world is doing, especially right now.

What we judge we cannot change. If judgment worked, the world would be different.

In a world that is based on projections, victimization, and us against them, we have to rise above this way of thinking and create beyond it.

It’s easy to do our inner work at our yoga retreats, personal development workshops, and in our like-minded communities.

But when the work really matters is when you are in the eye of the storm and you are clinging on to any shred of light you can see.

It matters most when it feels like you as one person can’t possibly make a difference.

So my sweet friends, WE, the collective WE created all of this. (And “this” started way before the election.)

This is what nobody wants to own. BLAMING the polls, marketing campaigns, media, racism, white privilege, and greed isn’t going to change anything. Being aware of and acknowledging these things is the beginning – and that is a very different energy than blame because it requires personal accountability.

If you are preparing your argument against or in favor of any or all of this, I ask you to get curious. Get out of the perceived “right”ness and get curious.

The collective WE can create a different possibility.

We know that we create our reality. Yet, have you doubted your ability to create beyond this illusion of fear and hatred that we are being bombarded with even for a moment?

There have been moments where I have. The sadness, grief, and fear suffocate my hope. Then I breathe. I pause. I ask a question, sometimes it’s “What else is possible here than I’ve ever imagined?”

I do the damn shadow work – the work that is so uncomfortable and I would rather avoid, project, hide, and join the blame war.

And I do the work again. I look at myself. And again.

I choose to be a voice of possibility when so many folks are sharing “information” that generates more fear and helplessness. Some days it’s all I can do because I can get sucked into the giant fear storm that’s swirling around me, especially on Facebook.

Then I act. I do my best to take action from a self-aware perspective, instead of a knee-jerk reaction.

We are champions. We are warriors. We are change agents.

And so is hope. Possibility. Progress. Action. Unity. Inclusion. Courage.

This is simply a point of view – take it or leave it. My intention with this is to create a pause for people to really think, instead of react.

Here’s what I know:

What if the biggest change came from stopping the self-judgment, which would stop the judgment of others, particularly those who believe differently? What if THIS is what changes the world?

What if one person really is the change? What if YOU are the one person who ignites possibilities that grow into a movement that creates a radical shift?

What else is possible that we haven’t even imagined?

And where ever we gave our power away to the election, fear, or division, will you please join me in claiming it back? It’s possible to unite and stand up together, but we must claim our power and stop giving it away to fear.

Our work has begun. The shadow work. The awakening. The activist within has been called.

Whatever that cause is that you are dedicated to – do that. If it’s your family, or church or Standing Rock, feeding the homeless, or building schools in Kenya – do what you are authentically called to do. 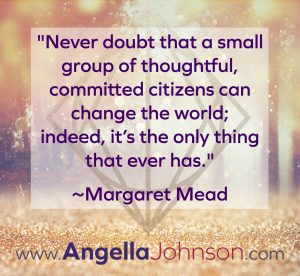 My invitation to you is simple: create like the bad-ass alchemist that you are.

Above all else, I believe in the goodness of humanity. I know we create change.