Big Magic: How to Create From Your Dream List

I will be sharing the stage with Elizabeth Gilbert next month in Seattle at an event called Connect: Transform What Really Matters hosted by Darla LeDoux.

My eyes leak a little when I really think about this. I’m delighted, honored, and so excited to share my message about Courage. 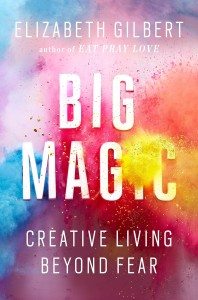 This book has changed my life. I’ve recommended it to hundreds of people and bought for close to a dozen people. Listening to it is my favorite – it’s just Liz and I doing the dishes or running errands.

One of my favorite parts of the book is when she says if you aren’t creating something, you are destroying something.

Our creative energy has to go somewhere and what I know is that when I’m not using that energy to create what I desire, I create a whole lotta drama and struggle in my life. When I’m not in the flow of my own life, then I am destroying part of my truth in order to live the lie that I can’t have what I really desire.

When I don’t create, I justify my limitations. I have to “think” about things instead of choose IN and move. I stall out. I delay my dreams. And then I judge the hell out of myself for falling into that trap again.

Damn am I grateful I do this far less often as I used to!

When I’m not in the flow of my own life, I am destroying part of my truth in order to live the lie that I can’t have what I really desire.

I’ve been a little obsessed with Liz and Big Magic. But in a non-stalker kinda way of course.

When I got the recent news that I’ve been accepted to speak and share the stage with her, I realized that I created some of my own #bigmagic.

Isn’t interesting that within 24 hours of posting the video of this amazing news, I got sick. The next day I lost my voice, which was not the greatest timing since I was on my way to Colorado to speak at an event.

While my body was calibrating to the current uplevel in my business, I acknowledged my sweet body for her strength and her requirement for nurturing and space, which I had been slacking on.

I also acknowledged the actualization of this awesome opportunity that I set into motion a couple of months ago.

Here’s what I did, which is the same process I did to expand my business globally and within a few weeks I expanded into new international territory:

The biggest impact on this creation were steps 3 and 5. In fact, these are the tools that I use daily. They create a lot of change quickly, which is why I like them.

Try it out. Experiment with it. Be open to the possibility that manifesting, which I call actualizing, can be wayyyy easier than we’ve ever thought or been taught.

And if you are in the Seattle area, let me know. 🙂