Lift as we climb – how working with women ignited my mission.

When people ask me why I focus on working with mostly women, I used to apologize because I feel really bad when people are left out and I didn’t want to leave out men. #ilovemen

I stopped apologizing a couple of years ago, but my energy still shrunk.

And now I don’t apologize.

I do work with men, and most of the people who are attracted to my work are women. I no longer say “Ignite, the women’s conference.” Ignite is my 3-day event for soulpreneurs. I don’t care if you have boy parts or girl parts, if you aren’t an asshole and you really want to change the world, then you are welcome.

And this includes my transgender friends too. #weallwin #equality

So why do I work with women? Until everyone has the right to their body and their education, regardless of their anatomy and body parts, I will actively support women and girls.

There are many places in the world that tell you that because you have a vagina, your brain doesn’t matter. You are property. Your voice and your goals don’t matter. Your body isn’t yours. And education? You can forget about that too.

We have more slaves now than ever in the history of America. When I first heard this, I thought it was #bullshit. How could that be possible? I’m talking about the sex slavery market folks.

Humans being sold. In my very state of Utah. And it’s likely happening in yours too, regardless of the country you live in. By the way, this does not diminish the fact that racism still exists and we have to do better at that too.

Here’s what I know: when one person experiences discrimination, we all do. We are all connected.

Bear with me – this isn’t about doom and gloom. It’s about being part of a solution.

A mission that I put on the back burner years ago has been re-ignited.

The mission is to support local and international causes that are focused on educating and empowering women.

You’ll see more of this in my brand and my events. (Thanks Laura Gisborne for your leadership and inspiration in this.)

In 2007 when my boss asked me (in a mocking way) what I wanted to do with my life, these words flew out of my mouth: “I want to empower women, starting with myself. I want to work with women and kids in Africa.”

I had never consciously said those words before. It was my TRUTH. It was effortless to say. Then I got scared because how the hell would I do that?

A few years later when I was creating my business, I secretly donated money to causes I believed in because my business coach at the time told me to not get distracted. She told me I needed to focus on investing in my business first before I gave money I shouldn’t be spending on other causes. Part of that was true, but part of it wasn’t.

But this mission of empowering women is impossible. I cannot empower anyone else.

What do I mean? What I CAN do is give the tools and guidance, but the empowerment piece is a personal choice. With education, support, and tools, more people can see that they have that choice.

And that’s the mission.

It’s the core of my work with my clients – see that you have the choice to create beyond your current circumstances and have the courage to friggin’ do it. BE it. Not just talk about it. Or complain that you aren’t doing it.

Choose it over and over until it becomes YOU and you no longer doubt the fact that you are a big damn deal and when YOU get behind a mission that scares you, it’s the thing that WILL change the world.

By the way, the world does not need saving, it needs people to do something that creates change.

My business and I personally support causes that actively support and educate women.

The cause I support locally is Operation Underground Railroad – they are DOING something about sex slavery. I support them and will likely be actively supporting them at my events.

On a side note, I don’t donate to causes unless I know where my actual money is going. I will not support causes that have admin costs that prevent the majority of the donation from going to the actual cause.

The international causes I support are through giving micro loans to Kiva, in addition to humanitarian projects I support that are non-denominational because just like I don’t care if you have girl parts or boy parts, I believe everyone, regardless of your religion or spiritual beliefs have a right to education, food, and clean water.

The other qualifier I have for causes I support is if your “cause” is about being a hero and personal gain, I won’t be a part of that either. I find that too much ego is wrapped up in humanitarian projects so I give my money and time elsewhere.

The projects I give back to internationally, aside from Kiva loans, are sponsoring two girls I met during my first trip to Kenya in 2013. By sponsoring, I mean paying for their education. I share this because if any of this speaks to you, a few hundred dollars a year makes a big difference for one person.

It’s time to put some projects together that impact more communities and girls who deserve to have their voice heard. Stay tuned for what’s in the works there…the question is how do we get more kids in school and to stay in school?

The more people who see that they have a choice to liberate themselves, the more we create change. Education is key.

Today I heard from my friend Jimmy, a young man going to college who also loves photography. He donates time and spearheads projects in his community. He is my eyes and ears in Kenya to watch out for my two girls. Today I got the news that one of the girls has improved her grades and the other is holding steady at an A-.

Jimmy is a stand-up guy in a culture where many men aren’t great role models. He is changing that by who he chooses to BE. Thank you Jimmy. 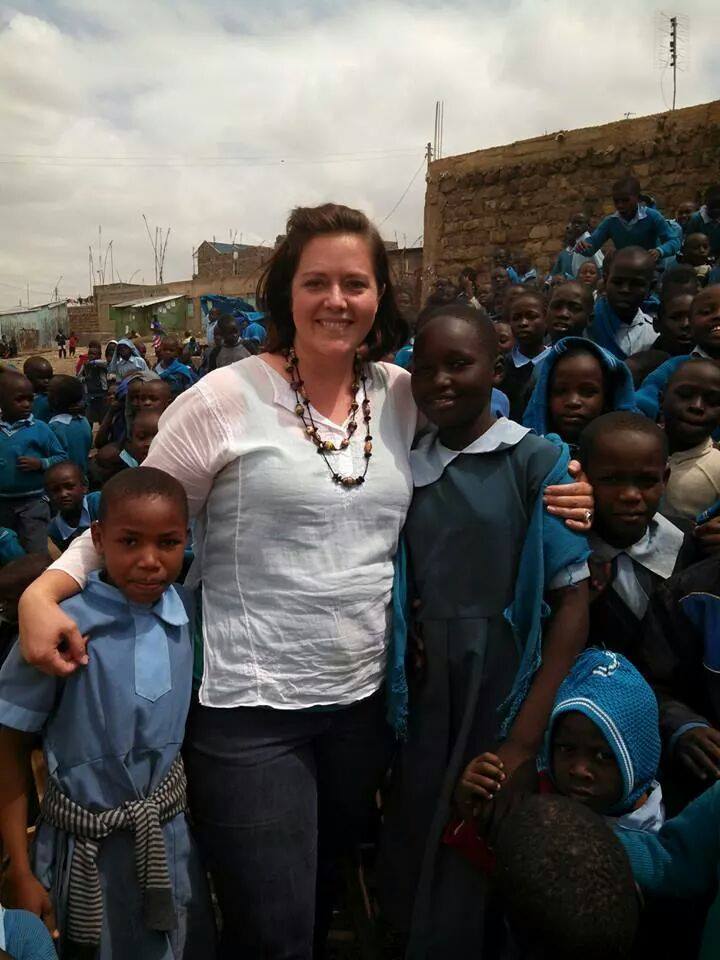 Here I am with Dorothy and Dorothy on June 28, 2013. (my birthday). We are surrounded by over 400 kids who were celebrating us for the work we did at their school.I met these two girls after attending a silent meditation and yoga no-retreat in Italy in June 2013, which is funny because I like to talk and I don’t really do yoga, but I was soul searching and ended up there.

How did I meet my girls?

While I was at a silent meditation and yoga retreat in Italy in June 2013, I had a clear message come to me during one of the meditations. I felt that there would be two kids who I would directly help when I was in Kenya. (I was heading to Kenya right after this 2-week solo trip to Italy.)

I would know them when I met them.

When I arrived in Kenya, I was overwhelmed with the hundreds of kids I could support. How could I pick just two?

Then I met them: Dorothy and Dorothy.

Different ages – in the same grade and both at the top of their class. The teacher was paying their school fees to keep them in school because they were so smart, she didn’t want to see them drop out because their parents couldn’t afford it.

The way out of abuse and poverty is education.

The leader of the project I was working on in Kenya during that trip gave me great advice. (I’m paraphrasing here): “If you sponsor kids to get an education, then sponsor them all the way through. Commit long-term. These families don’t need another disappointment of a mzungu (white person) coming here and telling them they will help but then disappear. When we disappear, that family has to figure out how to send their child to school when they don’t have food and all of this does more damage than help because it makes it harder to do real work here.”

I thought long and hard about that decision to sponsor Dorothy and Dorothy. Maybe this is why my husband and I haven’t been able to have kids – maybe these girls and others, are “our” kids.

So I committed to long-term support.

Why Kenya and why supporting efforts that stop sex slavery? Because it’s what I’m called to do.

Some people feel drawn to help literacy or the homeless. Or provide clean water. You might be drawn to another part of the world. Several of my clients support causes for animals and animal treatment, especially in our food industry. I have clients who are political activists.

As I write this, we are less than two weeks away from the Presidential election in the US. Isn’t it interesting how passionate people get about issues around election time? Imagine what we could create and change if that passion turned into DOing something after the election…

Do what you are called to do. Keep choosing that cause that scares you – the thing that you don’t know how the hell you will make a difference. Then do something, anything, toward it.

Why do we give? Because it feels good. Yes, we make a difference. But more importantly, who we become in the process is what actually changes the world. We become a change-maker.

The key is to lift as we climb. Teach others to climb for themselves.

A handout serves no one, it continues to victimize people who could be, and would like to be, champions of their own life if they knew they had the choice. Teach them they have the choice, and the courage to say yes to it.

First, you must choose it for yourself.

This is our work. 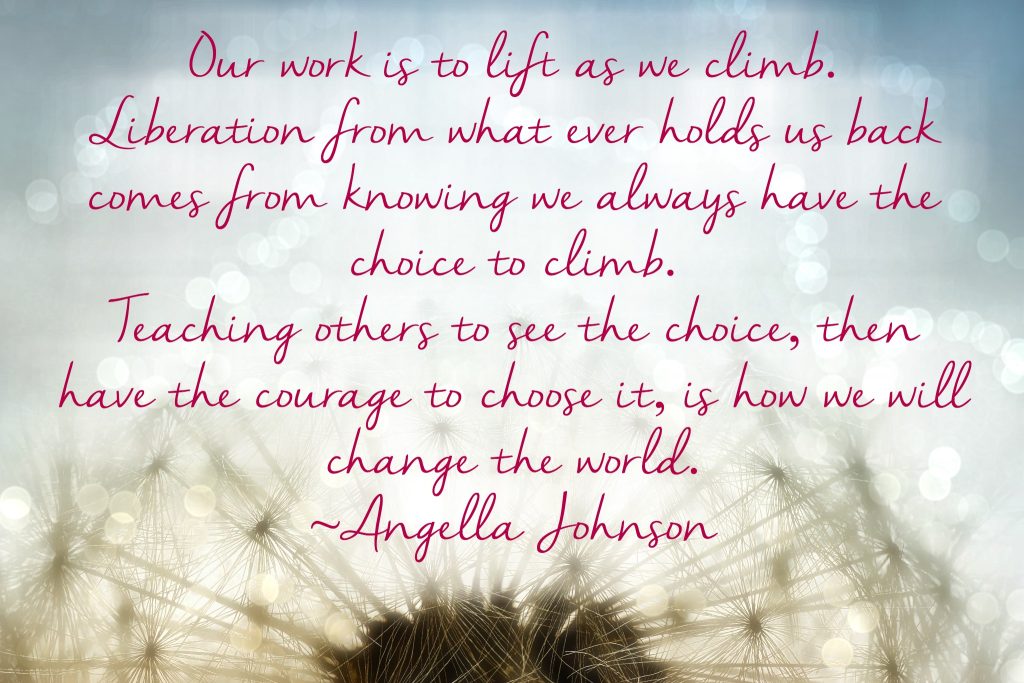