{Soulpreneur Sunday} How to Trust Yourself After Investing a Lot of $

That is when I stopped breathing for a moment.

It was the first time I had a strategy session with a business coach.

It was the first time someone invited me to invest more money than I had ever even spent on a car.

I had hit rock bottom and I knew something had to change. I was broke. I was wondering if I was broken and I knew that line of thinking wasn’t going to get me anywhere.

I had done it “my way” for long enough and it wasn’t working. 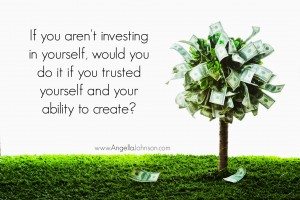 I was making ZERO in my business. I had no credit. I had already drained my small IRA accounts. There wasn’t a savings account – no sugar daddy – no trust fund – no one to borrow money from.

The program I did end up signing up for was around $860 a month plus the costs of travel to go to a live 3-day retreat twice a year. That’s about $10,000 for the year.

I asked if I could sign the contract and have a week to come up with the deposit. And that’s exactly what I did.

I sold things. I sold jewelry and things to consignment stores. I figured it out.

And I figured it out the next month and the next.

I did it! I created a six-figure business. I thought I had arrived!

The funny thing was is that my cash flow didn’t change very much from when I was making no money to now officially having a six-figure business. I was spending and investing as fast as it was coming in.

The only way to keep my financial commitments was to keep generating sales.

Until one day I couldn’t do it anymore. The insanity had to stop.

The hustle had taken it’s toll on my body and mental state.

I wasn’t happy. In fact, I was depressed.

So I blew it up and rebuilt but this time with ALL of me in tact, including my spirituality and intuition.

I was really ingrained in the coaching mantra that in order to BE a coach, you have to HAVE a coach. So I kept hiring coaches, whether I really needed them or not. And that is where things fell apart.

I invested in two program right after another that each cost $27,000 and the same thing happened. Within about 90 days, my income decreased significantly. The coaching wasn’t matching up with what I needed/desired. But I had signed a contract so what now?

One coach quit her business about 18 months after working with her, which now explains some of the wonkiness I experienced. The other agreed that the program wasn’t a fit for me.

But I signed contracts with both of them and I upheld my end of the agreement, although services weren’t delivered. {Ouch.}

In both instances, I didn’t look at one important aspect of WHY I was enrolling in the program.

In one case, I said no three times to the program and then allowed myself be talked into the sale. I chose into being bullied as a willing participant.

{Hint: when you market and sell yourself in your Marketing Archetype, you won’t have to overcome sales objections by being a bully or sales bulldog.}

In some cases when I invested it was because I thought that the coach knew something I didn’t and if I could learn it then I could create more in my business.

Bottom line: I didn’t trust what I did know.

When I invested in these programs I wanted:

None of those things happened but can you see where the intention didn’t match up with the program?

Choose coaching for the right reasons and you have to determine what those reasons are for you, and no one can determine that but you.

If the only reason you are hiring a coach is to buy into the coaching pyramid scheme of “you need to HAVE a coach in order to BE a coach,” then you will likely end up in a program that isn’t aligned with you or your goals.

After these expensive experiences, I stopped investing in long-term high-end programs. I was scared to do it again.

I got to heal from that. I got to really determine what I wanted to do, not what the “right” thing was to do.

I was tired of paying everyone else but me. I had coaches tell me that I was choosing “out” or quitting.

Truth: I was finally choosing me. I was finally putting myself and my household first. It made sense that coaches who were perpetuating the coaching pyramid scheme mantras told me I wasn’t going to succeed doing it this way.

On some level I was choosing an either/or paradigm. I could do this OR this, but not both. I was buying into lack to a certain extent.

I knew that hiring someone to teach me their business model wasn’t the solution.

So I invested in smaller packages and short-term things to fit a certain need. I knew I would find my next long-term coach when it was right.

And a few weeks ago I found that person. A fellow Conversational Truth Guide. I start in December. Woohoo! And I’m thrilled with this decision. I hired her for the right reasons (#7 and #8 on the list are the most important):

1. I know where I want to be a year from now. I’m very clear about that and this is according to me, not what I think a coach thinks I “should” do.

2. My coach must have a spiritual connection and be conscious about that role in their business.

3. She has created 7-figure success WITH her husband; and that is important to me as I continue to grow my business and my marriage.

4. My coach sees ME first and can coach me from that place, not just teach me her business model.

5. She has a growing team and I know that growing my team effectively is one of my core focus areas in the next year.

6. She didn’t bully me into the sale. I actually spoke with her a year ago about working with her and decided to go a different direction. Never once did she shame or bully me, she totally honored my decision. I’ll never forget that even when I didn’t enroll with her, I left the conversation feeling heard, empowered and honored.

7. It feels light. When I tune into the energy of what I desire for my business a year from now and five years from now, the energy of this coach and her program are resonant.

9. She is a fellow Conversational Truth Guide and being empowered to be me is very important after so many Guru Star coaches.

If you aren’t investing in yourself, would you do it if you trusted yourself and your ability to create?