I used to be really afraid of sales. I thought it was bad. I didn’t want to be like, “that.”

Over the years, here’s what I’ve discovered:

The very people I judged as being “too salesy” 🤑 actually had a comfort with money and asking for money that was very foreign to me. I could have learned a lot from them much sooner if I wasn’t so fixated on judging them.

While some of the tactics I observed were out of integrity (in my opinion) and the focus was to do whatever it took to make the sale, even if it meant half-truths or fully lying, I didn’t separate the behavior and tactics from the simple act of selling.

So I made it all wrong.

The other thing that was happening was I was intimidated by people who were asking for 5- and even 6-figure sums of money for things I was charging hundreds or maybe a couple of thousand dollars for.

“How dare they charge that?”

The universe has a way of bringing things full circle.

Imagine my surprise when I received a heated message from someone asking how dare I charge a few hundred dollars for one of my courses and if I wanted to “do the right thing,” I should give it to people who couldn’t afford it.

Or when someone told me that I was all about the money when I raised the price from $97 to $197 to attend my 3-day women’s conference. The person telling me this clearly had no idea the kind of funds it took to produce a 3-day event.

Bottom line:
I let my judgment of it all get in my way of ✨RECEIVING✨.

➡️ What we judge, we can’t receive.

With all of this judgment flying around in my universe and me taking my self-rightous place on my pedestal that selling is slimy, it was pretty ironic that I was barely making any money back then, right? 🤔

I don’t think selling is bad. However, I do think here are sales strategies out there that are disempowering and creating more harm than good.

I think we can all agree that some of the sales strategies we have seen, or even done, are… well they’re shitty.

So let’s uncover where we are harming ourselves by judging others who are selling.

I cringe when I hear people say things like, “They’re not in it to make money off of people.”

Why do I cringe?

“They” are a business who must cover their operating costs to keep the doors open.
“They” ARE actually there to make money off of people.

Money comes THROUGH people – you and I. We pay for businesses to stay open with the stuff we buy.

But “making money off of people” has been twisted into this shameful thing that’s bad.

Let’s go to the extreme of companies who are solely in it to make a lot of money off of people.

I know I just opened a whole can of worms…

But when we apply these same drastic behaviors to all businesses, we are denying our ability as business owners to serve people.

How can we serve if we can’t pay our bills, keep the doors open, or pay ourselves, let alone pay our employees?

How do we circulate money into our own economy, communities and support the causes we believe in if we don’t have funds with which to do that?

(No, this is not a conversation about how all money is bad and we should just do away with money altogether. I’m not going to go down that rabbit hole right now. If you believe that, I wish you the very best with creating a business and resisting money.)

Selling isn’t bad.
Asking for business isn’t bad.
Nudging people to ask if they are interested isn’t bad.
Marketing yourself beyond your comfort zone isn’t bad.

When we make all of that bad or wrong, here’s a common cycle I see:

(I use we and it may not apply to you, so we is the collective “we” as business owners.)

We end up working for free and not living the life we would really like to.

How is this helping anyone?

In giving away our value for free or super low cost, we train people around us that our service/product isn’t valuable. This, in turn, impacts our self-worth.

Good luck selling stuff when you think you suck and your stuff sucks.

We train consumers that they aren’t able to create beyond what they can “afford.” This creates an environment where everyone is devalued and kept small. In a way, we are enforcing beliefs that people are broken and can’t create anything greater.

This is probably the opposite of how you want to make people feel, right?

It also breeds resentment for the work that we do and ultimately the people we were once inspired to serve. This cycle of obligatory service sucks the life out of us and we become martyrs.

Martyrdom is not service.

I could go on, but I think you get my point.

“But Angella, what if I really can’t afford things?” or “What about the people who just really need a hand up in life?”

I get it. So let’s address that.

I remember when I was desperately calling drug rehab centers to admit a loved one for treatment. I was working in my corporate job making about $45k a year and making some side money from my jewelry design business.

After calling over a dozen places and being told that the MINIMUM cost would be a $10k payment UP FRONT before they could even be accepted into the program, I didn’t know what we were going to do.

I believed that if I didn’t get help my loved one get treatment, I would be attending her funeral within a month. It felt like a life and death situation.

But can anyone really “afford” it? What an interesting phrase, right?

I’ve seen countless families put themselves in major financial risk by paying for treatments for loved ones going through recovery.

I ended up finding a rehab program that was $1,800, which I ended up putting on a credit card and able to pay it off. It was a life saver.

I have been in line many times over the years filling a prescription and seeing an elderly person put back a prescription because their co-pay increased so much that they can’t afford a medication on their social security income.

I’ve been the person who didn’t get medical treatment because the cost was higher than what I had in my bank account at the time.

I have worked with homeless people who are trying to rebuild their life and look at their $9/hour job and the $1,500 a month it’s going to take to rent an apartment and the math just doesn’t add up. And they have kids to feed and transportation to pay for, let alone utilities and life expenses.

So I get it. If you want to help causes like anything I’ve mentioned here, it requires money. Money that you can make when you sell stuff in your business.

And here’s what WE can do about it:

(Again, the collective WE of being a business owner).

First off, stop judging sales. It will just play with your head and hold you back.

The sooner you embrace sales, the more you’ll infuse your integrity into the world of sales and collectively we change people’s lives and how we all create our economy.

Second, sell more and get uncomfortable.

I didn’t say lie, cheat, or be an asshole of a salesperson. That part is completely optional.

If you don’t want to be sleazy in sales, then don’t be. But selling isn’t sleazy so you’ve got to separate those two things.

Third, charge your resonant pricing. Ignore people who say “charge what you’re worth” and in order to “own your value,” then you must charge “premium” pricing.

Having said that, most people undercharge and can increase their prices even 10% and be in alignment still with what’s resonant with them right now.

Fourth, give back from a full cup. Can you truly give service when it’s done out of obligation or with the secret agenda of being seen as a good person so people will eventually refer you?

If you can’t fund causes you believe in, volunteer.

Giving service is a way to open up your ability to receive. It also takes the worry off of you and changes the energy. So serving others is a great way to serve yourself. Everyone wins.

I see a lot of women give a lot and do so at their own expense so be aware of giving service vs giving away energy and resources you don’t have.

In closing, remember this:

Your work is brilliant. It changes lives. You deserve to be paid well for it. By being willing to sell, you are also reinforcing people’s beliefs in their ability to create and that is life-changing. 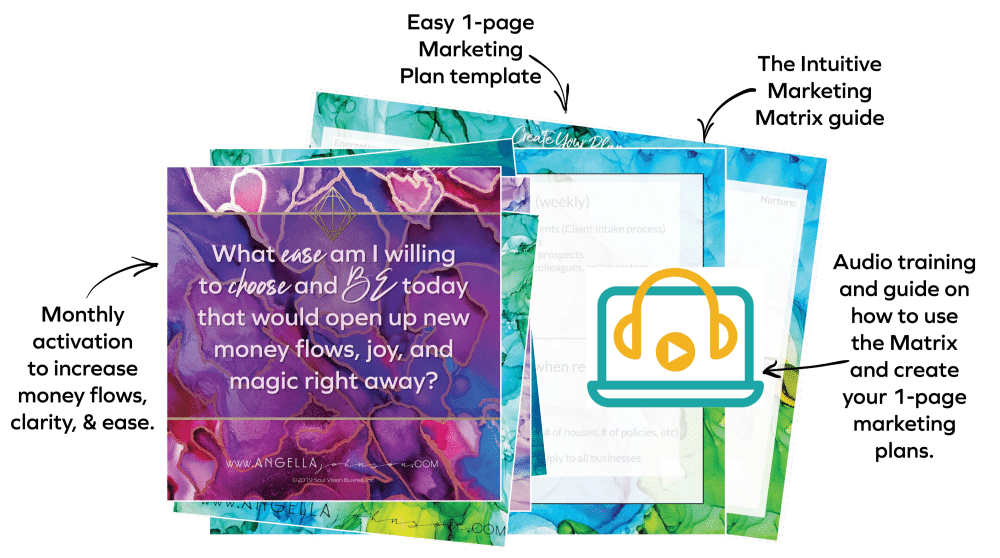