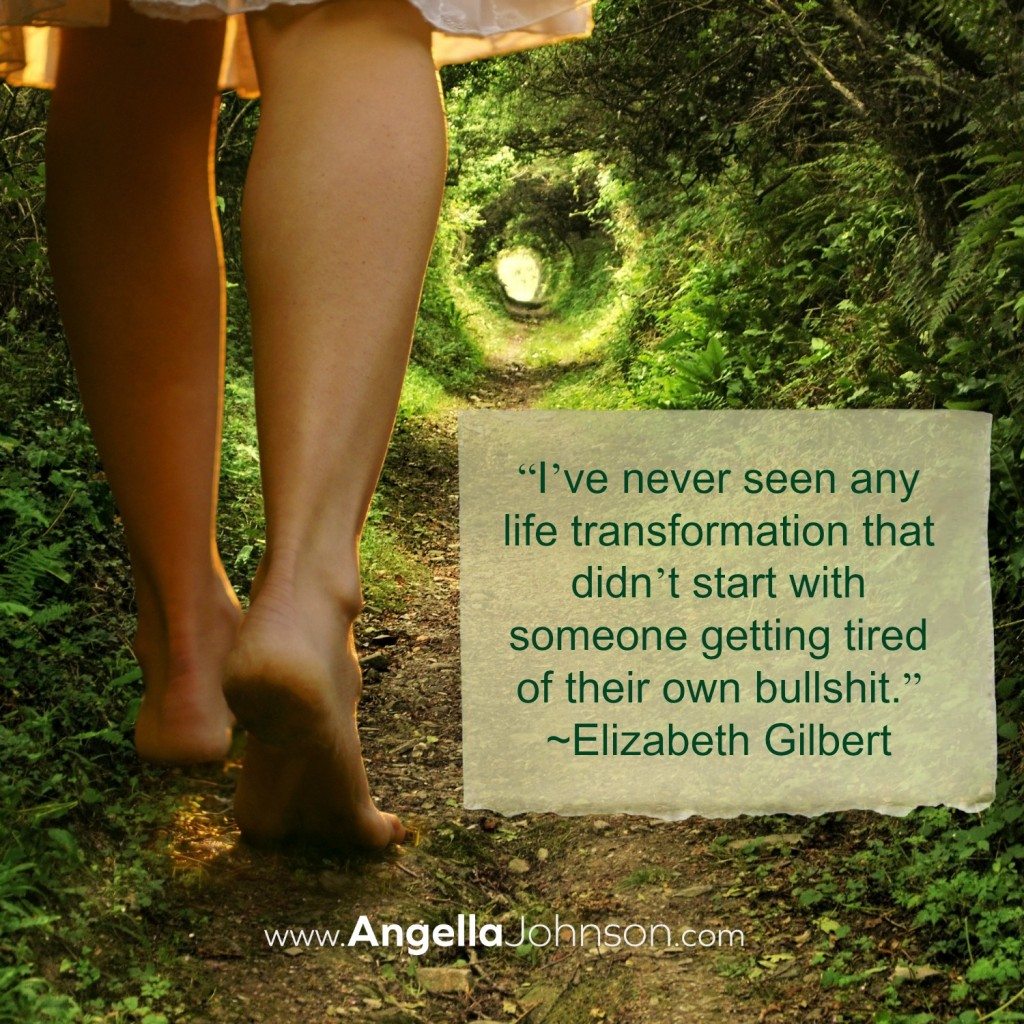 “I’ve never seen any life transformation that didn’t start with someone getting tired of their own bullshit.” ~Elizabeth Gilbert

Every time I change something in my life it’s because I’ve gotten absolutely tired of my own excuses.

I see where I’ve been getting stuck…where I’ve been buying my own excuses. As a possibilitarian, it’s painful to habitually choose limitations. It’s depressing.

I’ve even created “legitimate” excuses because I haven’t just wanted to own up to the fact that I wanted a break from creating my life.

Part of me has gotten tired…always stretching, growing, creating. I want to be lazy sometimes and rather than just being okay with that, I make up an intricate story of why “I can’t…”

How do you create real change?

In a Jack Canfield training back in 2011-ish we were learning about true accountability. Using the simple example of “Sorry I’m late, there was ______(fill in the reason/excuse here).”

In this training, we weren’t allowed to use those excuses as “reasons” because the truth is we didn’t care enough to be on time.

So if we were late and we were asked why we were late, the only honest answer was “I didn’t care enough to be on time.”

As liberating as this was, it triggered me as the habitually “late” person I was (and sometimes am). It triggered me, because it’s true.

Just like some folks are perpetually frantic, or worried, or pessimistic…that THING that always seems to be lurking is the THING that is the key that if we stopped defining ourselves by it, we could create more with more ease.

Why was I late? I didn’t care enough to be on time.

Why did my payment get in late? I didn’t care enough for it to be on time.

Why did I miss the appointment? I didn’t care enough to be on time.

Why did I not participate in services I paid for? I didn’t care enough to show up.

Why didn’t I lose weight? I didn’t care enough to.

This triggers people in all sorts of ways. The “legitimate” reasons like someone getting sick, or your kid throwing up in the car along the way to an appointment, or someone dying…I get it. All good reasons. Yes life happens.

And it still comes down to priorities – something takes over and you don’t care as much about the other thing.

This “I-Don’t-Care-Enough Accountability” typically brings up one of three responses:

It’s to the folks in group #3 I say this: It’s okay. Keep breathing.

Who would you be without those circumstances defining who you are and what you are capable of?
Keep breathing.

It doesn’t mean to not acknowledge those things that are challenging as hell and there are some days that it just plain sucks, like really sucks.

I’ve been there. And what if there is another possibility of how we can relate to those things that seem to have so much control over us?

This accountability conversation is frequently linked to the either/or paradigm we silly humans create for ourselves:

How could the “I-Don’t-Care Accountability” create some freedom for you? Where do you need to be really honest with yourself?

What’s the REAL reason you haven’t created something you say you desire? Just try the “I don’t care enough to have it” – it feels really good to be honest with yourself. And from THERE, you can create something new.

From there you can really own what’s a YES for you.

It’s those darn Nos disguised as Maybes that will getchya every time.