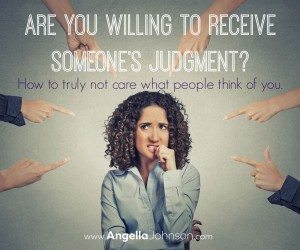 Have you received it?

Or even a message from someone who gives you his or her unsolicited advice about your life or business?

A couple of weeks ago, I had a couple of colleagues share with me about “hate mail” they received.

(The video at the bottom is the truth behind a recent uplevel in my own business and how I’m not backing down from showing up in the world.)

I remember the first time I received hate mail – I was devastated. I didn’t know people who didn’t even know me would take the time to send me a mean email.

One message I remember came a couple of weeks before one of my big events I was hosting and they criticized my body size saying that they would never attend an event by someone who “clearly didn’t take care of themselves.”

My mentor said “you know you’ve made it when you receive hate mail.”

Here is some good news about hate mail: You are getting people to think differently if they are so triggered about how you are creating your life.

But let’s look at the other side of this: the not-so-sexy distraction.

Whether it’s actual “hate mail” or simple criticism, it can distract you from creating what you really desire to create.

It’s why I stopped doing feedback evaluations from attendees at my live events.

I would get 98% rave reviews from people who were absolutely thrilled. But guess what I would focus on? And feel bad about? And fret over?

The two people who complained about something that was typically not important like the lunch break should have been longer and they had to hurry back, or there wasn’t coffee and tea all day long just at the two breaks, or something else that was ridiculous.

Or inevitably, I would get a complaint from someone who was pissed that they paid $97-$197 to attend a full 3-day event and they were triggered that there was a sales offer during the event and they didn’t appreciate that.

After every event I do a debrief with my staff and we know what to improve at the next event – there has never been a suggestion from an attendee that we didn’t already have on our list.

So I chose to stop opening my energy up to criticism, which is different than being willing to receive feedback.

Here is another angle: where you are the perpetrator.
We’ve all been there so no judgment, just improvement okay?

Anytime we participate in gossip and judgment about someone else and the way they create their life, it distracts us from creating our own life. Ah-ha, the not-so-sexy distraction is here again…

Several years ago I stopped engaging with a few friends because I noticed that every time we got together it was a gossip and complain session about other people and the way they were building their business. Truthfully, we were jealous of those people and it was easier to talk about them than to actually put ourselves out there in the world.

I noticed after those conversations I always felt bad – I known I had gossiped and having been on the receiving end of gossip, it’s hurtful. I hated that feeling so I stopped engaging.

So now I have a company policy: “This is a gossip-free and drama-free zone.”

Most hate mail, criticism or unsolicited feedback are from folks who aren’t actually putting themselves out there – but instead sitting on the sidelines critiquing all of the players actually on the field.

Do you have someone in your life who has advice for everyone else, but they don’t take it themselves? What a convenient way to direct energy to someone else instead of energy directed toward their own creations.

I recently spent a couple of days at a writers retreat and had the opportunity to spend some time with Melissa Moore, a bestselling author and TV producer. She was brave enough to talk about her story of being the daughter of a serial killer in her book and has made many TV appearances, including on Oprah, about her transformational story.

Over the course of a couple of days in this retreat, the topic of what to do with the “haters” came up. Melissa has received hate mail over the years too.

What does she do? She doesn’t reply back. Even when there is something that clearly defends her case – even when people are blatantly inaccurate or just plain cruel in their comments. Why? She doesn’t give them her power.

She focuses her energy on the people who are empowered and inspired through her work. She continues to create her life and put herself out there.

What is gossip and hate mail REALLY about?

Judgment is the ultimate distraction from creating and receiving the magic that we truly are.

In Access Consciousness there is a question that really triggered me the first time I was asked this “Are you willing to receive someone’s judgment?”

My first response was “hell no!”

Then I learned two things:

In order to receive the abundance we seek and desire, this requires our willingness to receive.

If we refuse to receive one thing, then we block our ability to receiving in general.

Here is the key: just because you are WILLING, doesn’t mean you will get the judgment or that you have to choose it. Your willingness will show you where you are triggered and when you can be willing to receive judgment, you are free.

The other way I look at this is what you resist persists. If you are unwilling to receive someone’s judgment, and you are constantly worried that it will happen, then energetically that is exactly what you are focusing on.

PLUS, if having fear of someone judging you keeps you from creating something magnificent (that book, more money, being visible, etc) then you limit what you create to feel safe – that safety is being disguised as suffocation of your essence and desires.

It’s common to do this to ourselves when we are so afraid of receiving someone’s judgment that we create more quietly or smaller so we don’t draw attention to ourselves.

Have you received hate mail? What did you do? Leave your comment below.

Here are some of my breakthroughs about my recent visibility when I got new head shots: